Third-quarter adjusted earnings of 60 cents a share topped analysts’ forecasts by 6 cents, while revenue of nearly $281 million also came in higher than expectations.

Veeva expects revenue for the fiscal year of about $1.09 billion vs. previous guidance of $1.06 billion to $1.07 billion.

Veeva’s market capitalization is now $22.3 billion. It has about 3000 employees.

Veeva cited “outperformance in both Veeva Commercial Cloud and Veeva Vault” product lines”. Veeva Vault CDMS is now rolling out in a large-scale Phase 3 trial for more than 12,000 patients across 700 sites and 32 countries, the company says.

Veeva also added two acquisitions in the quarter: Crossix and Physicians World. The financial impact of these two deals to Veeva’s 4th quarter is expected to be total revenues between $13 and $15 million and a non-GAAP operating loss of $6 million.

Physicians World is a platform for Pharma events. Outsourcing_Pharma says Veeva paid about $40 million for it. Crossix is a leader in privacy-safe patient data and analytics.

Rather surprisingly, not many hands went up at the fireside chat with the CEO of Boxed (New York) when the audience was asked how many of them had heard of the company. Perhaps it was the cold, breezy and wet weather at Propelify, on the Hoboken waterfront, that had many attendees struggling for ways to keep their hands warm, including keeping them in their pockets.

To Chieh Huang, the upbeat CEO who cofounded the online and mobile, membership-free retailer of bulk-sized packages in an Edison garage in 2013, the lack of recognition was no cause for concern. Rather, it was an indication that there’s plenty of scope for further success at this largely under-the-radar “unicorn.” In addition to its burgeoning B2B and B2C shipping operations, currently serving the lower 48 states, Boxed also manufactures and licenses its own line of warehouse robotics equipment, which is sold or leased to noncompeting international customers. When asked about overseas expansion opportunities by Aaron Price, Propelify founder and recently appointed president/CEO of the New Jersey Tech Council, Huang indicated that there is still ample potential for expansion within the U.S.

The company had humble beginnings, generating about $40,000 in revenue during its first year, but it has certainly come a long way since then. “It is not that sexy to be selling toilet paper out of your garage, and having your own kids and friends rip you for it,” Huang recalled. Even today, his parents ask him when he’ll find a real job. While some family members and friends surreptitiously check out what’s in your medicine cabinet, Huang is more likely to be found inspecting what brand of toilet paper you have on hand. Hopefully, it’s the Boxed house brand, Prince & Spring, creatively named after two streets near the company’s offices.

Boxed also maintains a large warehouse and fulfillment center on our side of the Hudson — in Union, alongside Route 78. Still privately held, the company generated hundreds of millions of dollars in sales during its most recent trailing 12-month period. Moreover, Huang said that Boxed is hiring, with an ongoing need for engineers, tech professionals, marketers, product designers and UX experts. During the fireside chat, he noted that approximately one-third of the employees at the New York offices are relatively recent hires. This means that Boxed faces the same challenge as most businesses: managing growth while striving to keep the corporate culture intact. Huang said that one of his keys to success has been the hiring of some very experienced executives for critical roles in the company. He also candidly confessed that he has a “no A-hole policy.”

Keeping good employees is a priority. Boxed has achieved this by offering such benefits as free healthcare and retirement fund planning. There is also a $500 emergency fund for each employee; approximately 13 percent of Boxed workers have taken advantage of this unique perk. In terms of potentially competing with Amazon as an “everything store” in the e-commerce space, that is not a realistic goal for Boxed, or for any other company, Huang admitted. “That race has already been won,” he said. “It’s like trying to beat Usain Bolt in a 100-meter race. … You’re not going to be able to do it.” Huang expects Amazon to remain a formidable competitor for years to come, or at least until Jeff Bezos decides to step down. Instead, you need to go after specific verticals. For instance, the Prince & Spring house brand has been helping to drive loyalty. A focus on the end customers, and what pain point you’re helping them solve, should be your main goal.

Boxed first acquired outside investment in late 2013, so the company knows that professional investors are unlikely to want to stick around forever without some type of monetizing event or exit. Huang hopes that Boxed can remain an independent company; and, as of now, he believes that he is the right choice to remain at the helm and lead it forward. What advice does he have for fellow founders and entrepreneurs? Try to stay level-headed and avoid emotional roller coasters. “I used to get very high or very low,” he recalled. Also, work to streamline the linear processes within your organization, he suggested

Rob Rinderman is a contributor to NJTechWeekly

Update 2/9: Salesforce (CRM) briefly passed SAP (SAP SE) in total market value for the 1st time during the past week . 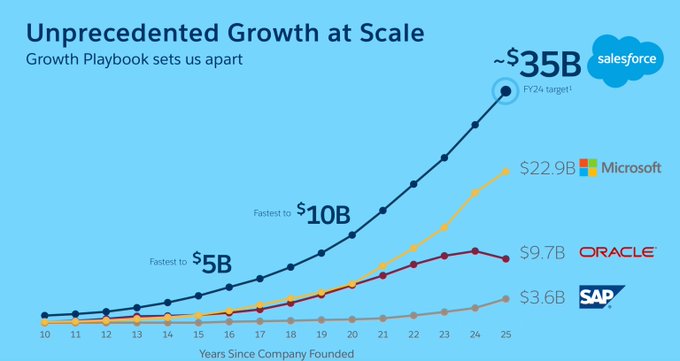 I’ve been wondering for some time whether Salesforce’s (NYSE: CRM) growth would falter, but it really hasn’t yet in a big way. Though a string of acquisitions have had a dilutive effect, investors have rewarded it with a growth premium in terms of a higher Price to Earnings (PE) ratio. Its somewhat akin to what happened last year when Netflix briefly surpassed Comcast in market value. Such a PE advantage, though tenuous, gives Salesforce a strong currency for acquiring others.

Salesforce may be on the verge of becoming a more powerful enterprise player than the possibly capital-constrained SAP, under pressure from an activist investor, in spite of its considerably smaller revenue & profit base.

In 2018, SAP redesigned & retargeted its CRM, but its way too early to measure how effective that relaunch has been.

SAP CRX ( Qualtrics): The acquisition of Qualtrics opens up an adjacent market to CRM that Salesforce isn’t much of a player in today.

Adobe Mkt cap 134.91B, essentially the same as CRM

LinkedIn . Acquired by MSFT for $26.2 billion

Netsuite . Acquired by Oracle for ~$9.3 billion

Tableau Acquired by Salesforce for $15.7 billion

Demandware . Acquired by Salesforce for $2.8 billion

Marketo Acquired by Adobe for $4.8 billion

Salesforce needs to decide whether to build a strategy around smaller customers, or double down on larger customers.

Salesforce is also likely looking at ways to accelerate its CRX ambitions.

Another possibility is a dead stop to Salesforce’s organic growth, but that seems unlikely given the size and projected growth of the market

Not discounting Oracle at all, but see it more as a hard engineering company, inconsistent in end user applications.